How to live stream: a beginner’s survival guide

We’ve heard many people talk about wanting to start streaming with something more than just a smartphone, but having no idea where to start. Without having a basic understanding of how live streaming works, it could be very intimidating to even try. To help figure this out, we will try to explain how to live stream in the simplest terms possible. We will go over the basic ingredients and steps of how to do a live stream, as well as provide some example setups.

It’s important to understand that each camera, encoder, and streaming platform is a bit different, which is why this article goes over the very basic principles of how to live stream. Regardless of which equipment you are using or what it is you are planning to stream, understanding these basic components and steps will allow you to figure out how to live stream any scenario, big or small.

The basic setup and flow of a live stream

A stream of video data (from a camera, for example) for your live stream is called a video source. Respectively, a stream of audio data is an audio source. A simple stream might consist of just one video and audio source, while a more complex one may have two or more audio and video sources involved. Different combinations of video and audio sources are referred to as “scenes” or “layouts” (think full screen, picture in picture, or side by side layouts).

The video source(s) for a live stream may come from:

You do not need to have a storage card in your camera to live stream (only if you want to make a local recording).

Audio sources may come from a lapel, handheld, or USB microphone, or from an audio file. If you run your microphone signal through your camera, the audio will come embedded in your video stream. This is a very common way to capture audio. Always be mindful of the background music in your live stream because online video platforms monitor and flag copyrighted content. You may receive a copyright violation or even be banned from streaming.

How to capture audio and video sources

In order to start streaming online, you will need to capture the signal from your audio and video sources. Most video sources today use HDMI™ or SDI outs for external connection. Both HDMI™ and SDI cables are able to carry embedded audio along with video. If you are using a computer with software encoder to stream, then simply connecting a camera to a computer using an HDMI™ or a SDI cable will not work. You will need an intermediary device called a capture card. A capture card (like AV.io HD for example) connects to the camera on one side, and to the computer over USB on the other, capturing exactly what the camera “sees”. Most hardware encoders, on the other hand, come with internal capture cards, so you can connect video sources directly to the hardware encoder and they will be captured. We will talk more about streaming software and hardware below.

If you are using a USB camera or microphone, however, you can expect to capture these signals by simply connecting them directly to a computer.

Not all cameras are created equal when it comes to live streaming. For example, certain cameras relay all the display UI overlays (i.e. battery indicator, crosshairs, histograms, etc) along with the video signal. We have a (continuously updated) list of camera models that offer a “clean signal” and work well for live streaming. You can find that list here.

What is an encoder and why do I need one?

An encoder “translates” the video signal for the internet. An encoder is a piece of software that compresses and converts the incoming audio-video signal into digital, web-friendly format. You need an encoder because most video sources don’t come ready for live streaming: video cameras are made for recording large and bulky video files, not intended for streaming in real time.

Essentially, today you have the choice of going live from three types of encoding devices: mobile phone/tablet, a computer with encoding software installed, or a dedicated hardware encoder. While a mobile phone may be an all-in-one video source and encoding device, the live production capabilities offered by a mobile device are extremely limited. In this article, we want to look at the encoding tools that are able to handle more professional live streams with the ability to add multiple cameras and layouts.

Software encodersEssentially, a software encoder is an installed application, that uses your computer’s resources (CPU) to neatly pack up the video and send it online. As previously mentioned, a capture card is necessary to capture the video signal from your source to your computer.

There is a wide variety of free and paid streaming software available, including Wirecast, vMix, Streamlabs OBS, the ever popular OBS Studio, and many more. You can learn all about the differences between them in our best streaming software article. OBS Studio is a good way to start learning about encoding because it’s free to download and install, all settings are easily accessible, and there are many online tutorials to help you along.

It’s important to remember that streaming software always takes a toll on the computer’s CPU. This means that if your computer is not powerful enough to handle it – your viewers may experience buffering, dropped frames, while you experience a very laggy computer. We recommend having a machine no lower than Intel Core i5 2.8 GHz, 8GB memory for a good live streaming experience.

Hardware encodersA hardware encoder (a.k.a. streaming hardware) is a dedicated device that handles all the encoding. Audio and video sources are connected directly to the hardware encoder, no capture cards required. Modern encoders are capable of taking in multiple video input formats, including HDMI™, SDI, VGA, and DVI, as well as XLR and 3.5mm analog audio. Naturally, hardware encoders need to be connected to the network (via Ethernet, or Wi-Fi, or cellular) in order to stream.

Hardware encoders can come in different shapes and sizes, functionality and price points. Some are small and portable, with the ability to take in only one or two video sources (i.e. Webcaster X2). Some are designed to be taken on the road: these use a bonded cellular signal for an Internet connection. Examples include Teradek VidiU and LiveU encoders. Others are much more complex and powerful, able to take in many video and audio sources, record, mix, scale, and switch between them. For example, Epiphan’s Pearl-2 and Pearl Mini are professional all-in-one live production studios with incredibly vast functionality. 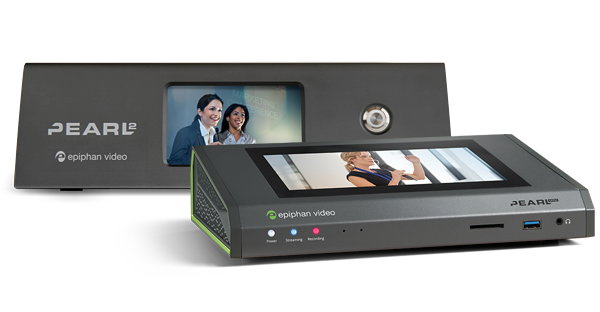 Be sure to check out our streaming hardware vs software blog article if you want to learn more about choosing the right encoder for you.

Both software and hardware encoders have similar variable settings that affect your live stream. Here are the most important ones:

Framerate: how many frames per second are shown. Expressed in frames per second or fps. Common inputs: 10fps (outrageously low, infuriating to the human eye framerate), 24 fps, 30 fps, 60 fps (beautiful and life-like).

The most common resolution sizes today are 720p and 1080p. These numbers refer to to number of pixels measured vertically.

Bitrate – how much video data you are uploading per second. Generally expressed in kilobits per second or Kbps, although megabits per second (Mbps) are also sometimes used. That’s roughly Kbps divided 1000. General range: 1000-8000 kbps. Common values: 1000 Kbps (absolute minimum) 2500 Kbps, 3000 Kbps, 5000 Kbps. This number depends on frame rate and resolution: the higher the frame rate and resolution, the higher the bitrate needs to be for a smooth, high quality live stream.

Codec: refers to the method of compressing (encoding) audio and video data for faster transmission. H.264 is the most common one.

Keeping a fine balance between bitrate, frame rate, and output resolution is what makes a good stream. How high you can go depends largely on the type of encoder you use and your internet bandwidth. For example, with sufficient bandwidth, a hardware encoder like Pearl-2 is able to stream 1080p resolution at 60 fps without skipping a beat, where an older computer with streaming software may really struggle, dropping frames, and causing buffering, even with sufficient internet.

A streaming destination refers to the online site, platform or app where your live video will be available to others. These destinations are more commonly referred to as content delivery networks, or CDNs. Popular free Content Delivery Networks (CDNs) include Youtube, Facebook Live, Twitch, Periscope.

There are also paid streaming platforms out there, that offer much more control over where and how your live stream is presented, who sees it, and even whether the stream is monetized. CDNs like Livestream Vimeo, DaCast, StreamShark, and others offer different monthly plans, depending on the amount of data you upload.

Free or paid, you will need to sign up and log into the CDN of your choice. Some platforms (YouTube) require you to go through a few additional steps and wait for 24 hours before you can start live streaming.

Naturally, each CDN caters to a specific audience. As soon as you figure out what you are live streaming and who your main audience is, you can begin choosing an fitting CDN. Here are some examples:

Our advice would be to start with a free CDN, figure out all the ins and outs, and then move on to a paid one if you need to. So yes, you could potentially start live streaming for free right now! Be sure to check out this how to choose a CDN article for more detailed information about the differences between content delivery networks.

Set up an event and fill out the description

A standard feature of an overwhelming majority of CDNs is letting you choose between “going live right now” and scheduling your live event for the future. In either case, you will need to fill out the live stream description, perhaps choose a category for your stream, and add some tags. Using hashtags is a great way to have your stream be found.

Getting a steady network connection is often the trickiest part of live streaming. We found that the most reliable connection is a hardwired dedicated Ethernet line. You can go live using Wi-Fi or cellular (4G/LTE) Internet, but these types of signal tend to fluctuate more than fiber.

We can’t stress how important it is to perform a speed test beforehand. We recommend to always have approximately 1.5x your stream’s bit rate available to account for these possible network fluctuations. For example, if your live stream has a bit rate of 5 Mb/s, then ensure you have at least 7.5 Mb/s total upload bandwidth available to ensure a reliable live stream.

We go into much more detail about the required Internet bandwidth for live streaming in a separate article, be sure to check it out.

How to live stream: 5 basic steps.

Step 1) Connect your audio and video source(s) to the encoder.

Naturally, make sure everything has power. Pro tip: whenever possible, use an AC power instead of battery power, for all and any device, especially a camera. Placing your camera on a tripod is always a good idea. Use a capture card if you are using your computer with encoding software. No capture card necessary with hardware encoders like Pearl-2.